Three years ago this week, I was fretting over this fellow I knew from my old job. We'd been emailing back and forth with increasing frequency over the previous weeks. Christmas eve, he sent me one more. A close friend of his, someone he knew his whole life had just died that day. The man's wife had died only a month earlier. He was obviously distraught, but tried not to show it. My heart softened at that moment. Soon after, I went to sleep in my sister's loft at her home in Indiana. That night I had a dream. It was simple and brief. He was behind me, with his arms wrapped around me and his head nestled in my shoulder. The next morning, I woke up with such a warm, contented feeling. I knew at that moment, before we even went on our first date, that I was already in love with him.

The date is set: August 29, 2009. At the same church I graduated. Reception at a WWII inspired hall, which is appropriate, I suppose, since we made it official on December 7th. He'd asked me in September, but being a princess, I waited for the ring.

This weekend I accompanied Jeff to a show down in Louisville, Kentucky. He played a benefit for a woman's shelter at the Pour Haus. I had food poisoning the whole first day, which made driving pretty uncomfortable. Luckily, I was feeling better the next day. As planned, we spent a couple hours at the Cave Hill National cemetery, final resting place of Colonel Sanders, on the way out of town.

I left the clip of the creepy Jesus and screaming children sculpture out of the video, but it's worth checking out as well.

"Essentially all I've wanted this to be is a journal of a life, because I think that sort of thing is worth recording." - Harvey Pekar

Going to see this tonight. 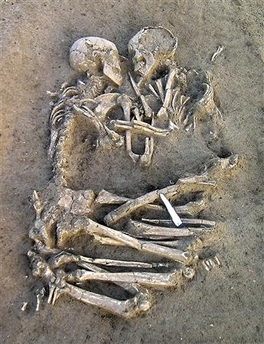